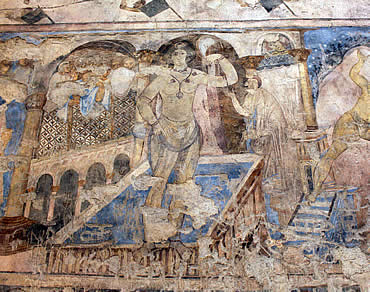 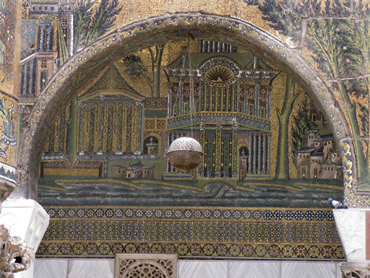 The project will examine the process of artistic creation, the identities and origins of the creators, and their organisation, training, and roles in transmitting artistic practices and cultural memory. ‘Identity’ in this context refers to ways of doing and making things, or to communities that people thought of as their own, i.e. identified with, even if unconsciously. Monumental art is important because it occurs on the most visible heritage surviving in the Middle East, from major buildings (such as the Dome of the Rock in Jerusalem and the Great Mosque in Damascus) to churches and ‘desert castles’. How this art was integrated into the decorative programmes of whole buildings is central to understanding the contexts, meanings, and functions of the artworks and the structures they decorate. Moreover, this project will ascertain the roles of the ancestors of peoples who live in the region today in designing and creating this art, and their sources of inspiration.

This project will analyse the monumental art (large decorative programmes on buildings) of two areas of the former eastern Roman Empire which came under Islamic rule but which have never been the subject of an integrated comprehensive study: Egypt and Syro-Palestine (modern Syria, Jordan, Lebanon, and Israel/Palestine). It will determine systematically how the strength and nature of the local ‘classical’ (Greco-Roman) traditions and expressions of identities influenced monumental art in these regions during Late Antiquity (AD 250–750), the period of transition from paganism to Christianity and, in turn, to Islam.

To achieve these objectives, this study will define and distinguish between the different strands of classical influence, both local and external (from the centres of Rome, Constantinople, and Alexandria), and investigate the roles of local artists and artisans as creators rather than imitators. The results will transform our understanding of the artistic culture of the late antique Middle East because monumental art (large decorative programmes of paintings, mosaics, or relief sculptures on buildings) provides glimpses of other aspects of identity for which less evidence has survived.

By placing this art in the context of the ‘longue durée’, this project will move it nearer to centre-stage in the study of art history in general, of Middle Eastern history, and of related fields. Tracing the strong local classical component in both late antique Christian and early Islamic art will demonstrate to a wider audience, interested in ‘classical reception’ studies the classical legacy that the East has in common with the West. This project also will move the focus of the study of early Islamic art beyond patronage and iconographic interpretation to the role of local artisans in its creation. The results will lay long term foundations for a greater appreciation of the monumental art of the Middle East and the importance of preserving this heritage.

Following the tragically early death of Judith McKenzie, the Principal Investigator, in May 2019, the project is being wound down early, while every attempt is being made to ensure that as many of the promised results are completed to the point of publication