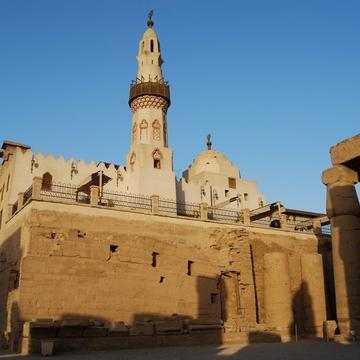 The church under the Mosque of Abu el-Haggag in the Court of Ramesses II, Luxor

Late Antiquity (c. A.D. 250–750) saw a shift in religion in Egypt and the Middle East from paganism to Christianity and subsequently Islam. The texts that record this process have been intensely discussed; the archaeological dimension much less so. Since religious buildings are central to religious practice and identity, their treatment—survival, adaptation, or destruction—reveals a great deal. This multidisciplinary project examines the spatial and iconographic aspects of material culture to reveal a complex and nuanced picture of interactions between pagans, Christians, Jews, and Muslims. The data provided by the archaeological record of what happened to the sacred space of the gods and to their images will then be related to written accounts. Archaeological analysis can be used to calibrate the written record. By providing a perspective otherwise lacking, it can access the acts of participants and processes at a local level. These are voices that are  omitted from, or presented differently in, elite religious or imperial sources. The geographic focus is on a comparison of two key areas of the former eastern Roman empire which later came under Islamic rule, Egypt and the Levant, which also exhibit regional differences. The results will be published in a book and a website.

The four year project, which began in September 2011, was funded by a Leverhulme Trust Research Project Grant. It is a collaboration between Neil McLynn (a historian and the Principal Investigator) and Judith McKenzie (an archaeologist), with other participants for fieldwork, such as Ross Burns, Andres Reyes, Sean Leatherbury, Marlena Whiting, Sarah Norodom (for Syro-Palestine), and Mohamed Kenawi (for Egypt).

The extensive photographic database of relevant temples, churches, mosques, and other sacred sites is being published on the Manar al-Athar website [http://www.manar-al-athar.ox.ac.uk/ ]. This includes many sites in Lebanon, as well as the Holy Land, with evidence of conversion or shared usage. This detailed record will augment the print volume, which will include a gazetteer of the main sites in Syro-Palestine by Miranda Williams, with Judith McKenzie, Ross Burns, Marlena Whiting, and others. The further expansion and long-term development of the Manar al-Athar website has received support from a variety of additional sources.