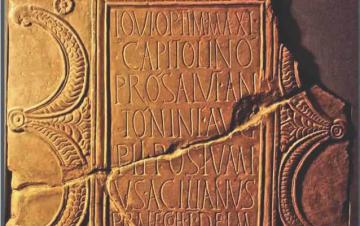 Directed since 1975 by R S O Tomlin, who retired in 2010 as University Lecturer in Late Roman History and is now Emeritus Fellow of Wolfson College, the project continues the work of R G Collingwood and R P Wright, whose first volume of Roman Inscriptions of Britain appeared in 1965. Reprinted in 1995, with addenda and corrigenda by R S O Tomlin, it published the inscribed stones found before 1955.

The second volume of Collingwood and Wright’s Roman Inscriptions of Britain (Instrumentum Domesticum: inscribed personal belongings and the like) was edited by S S Frere and R S O Tomlin in eight successive fascicules between 1990 and 1995 (Alan Sutton, for the Administrators of the Haverfield Bequest), with a closing date of 1986.

In 2009, R S O Tomlin published Roman Inscriptions of Britain III (Oxbow Books, for the Administrators of the Haverfield Bequest), which comprised all stones found since 1955, with a closing date of 31 December 2006. He named R P Wright and M W C Hassall as co-authors, since they first published many items in the annual surveys of Inscriptions in Britannia (Wright until 1975, Hassall 1971–2007). Volume III went further than Volumes I and II in publishing items, where possible, both with a photograph and a drawing.