The focus of the project is the publication of papyri from the Oxyrhynchus Papyri Collection housed in the Sackler Library at Oxford. The collection comprises thousands of papyrus texts from ancient Oxyrhynchus and other sites in Egypt and is the largest collection of papyri in the world. It includes principally literary, documentary and other texts in Greek, dating from the third century BC to the seventh century AD, but also a few hundred texts each in Egyptian, Latin and Arabic, and a very few in Hebrew and Aramaic, Syriac and Pahlavi.

Most of these papyri come from excavations conducted at the site of Oxyrhynchus by Bernard Grenfell and Arthur Hunt (later Fellows of The Queen’s College, Oxford) in 1896–1907 on behalf of the Egypt Exploration Fund (now Society). Since then scholars have worked continuously to catalogue, decipher and publish this material: the first volume of The Oxyrhynchus Papyri appeared in 1898, and volume 83 will appear later in 2017. In 1966 the publication of these texts was formally adopted as a Major Research Project of the British Academy, jointly between the University of Oxford and University College London. The Academy continues to provide an annual sum for expenses, but the main financial support for the research into and publication of the collection now comes from the Arts and Humanities Research Council: the current quinquennial grant runs until September 2020. The General Editors of the series are Prof. Peter Parsons (Oxford), Prof. Nikolaos Gonis (UCL) and Dr Amin Benaissa (Oxford). The project employs a Researcher and Curator based in the Sackler Library, Dr Daniela Colomo, and another Researcher based in UCL, Dr Ben Henry.

The mass of unedited material represents the random waste paper of seven centuries of Graeco-Egyptian life. About 10% is literary, that is, the fragmentary remains of ancient books; the rest documents public and private, including codes, edicts, registers, official correspondence, census-returns, tax-assessments, petitions, court-records, sales, leases, wills, accounts, horoscopes, and private letters. The book-fragments provide early texts of the Greek literature that we knew already, as well as unique texts of the Greek literature that was lost in the Middle Ages. They are also evidence for the range and depth of literate culture in Greek among the inhabitants of Graeco-Roman Egypt. The documents provide grass-roots evidence for the law, society, economy and culture of Egypt from Ptolemaic, through Roman and Byzantine, into Arab rule. 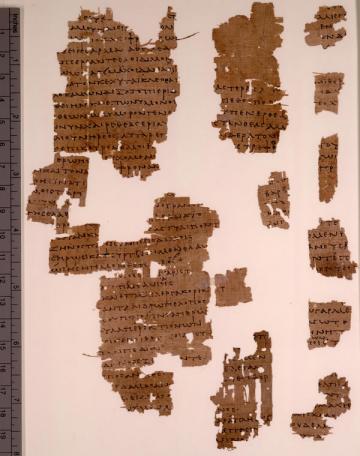 Over 5,000 papyri have been published to date in the Oxyrhynchus Papyri series, all with translations and commentaries in English. The editors include senior academics in the UK and abroad but also students studying papyrology at postgraduate level. We produce one new volume each year, published by the Egypt Exploration Society. Each volume contains a selection of material covering a wide range of subjects. Thus the most recent six volumes (vols. 77–82, 2011–16) offer new fragments of lost tragedies (Sophocles’ Tereus and Euripides’ Ino), a poem about the apotheosis of Nero’s wife Poppaea Sabina, the earliest extant copy of the Septuagint Psalms, actors’ scripts of popular mimes, rare early witnesses to the texts of Polybius, Plutarch and Oppian, Graeco-Latin glossaries, specimens of magic and ancient medicine, alongside documents which illustrate both the public and private life of Oxyrhynchus, such as taxation and legal documents from the earliest years of Roman rule in Egypt (20s BC), a new constitution of the emperor Septimius Severus, doctors’ official reports on assault victims, an astonishing contract to lose a wrestling match, documents detailing the economic activities of the city’s nobility in late antiquity, and programmes of shows at the hippodrome. Images of published pieces up to volume 79 (apart from texts distributed in the past to other institutions) have been uploaded to the Imaging Papyri website by a project directed by Prof. Dirk Obbink.

Requests to visit the collection and queries about published papyri should be addressed to Dr Daniela Colomo in the first instance, at: daniela.colomo@classics.ox.ac.uk.