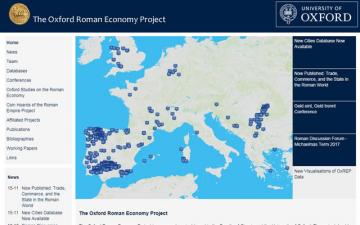 The Oxford Roman Economy Project is a research project based in the Faculty of Classics, at the University of Oxford. The project, led by Prof. Alan Bowman and Prof. Andrew Wilson, was originally funded by the Arts and Humanities Research Council  for the period from October 2005 to the end of September 2010, but additional funding through the generosity of Baron Lorne Thyssen now enables it to continue.

The research programme addresses the fundamentals of the Roman imperial economy and analyses a wide range of economic activities (including agriculture, trade, commerce, and extraction), utilising quantifiable bodies of archaeological and documentary evidence and placing them in the broader structural context of regional variation, distribution, size and nature of markets, supply and demand. The project mainly focuses on the period between c. 100 BC and AD 350, including the era of greatest imperial expansion and economic growth (to c.AD 200), followed by a century conventionally perceived as one of contraction or decline. Geographically, the project draws on material selected from all over the Mediterranean world.