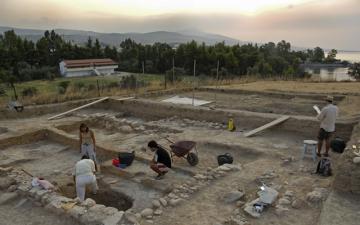 Lefkandi is a key site in the Aegean during both the Bronze and Iron Age. The ancient settlement on Xeropolis is a tell which was occupied without break from the Early Bronze Age (c. 2100 BC) to the end of the Iron Age (c. 700 BC). The site is located between two well-known ancient cities, Chalcis and Eretria on the island of Euboea. Xeropolis was first excavated in 1964 under the direction of Mervyn Popham and Hugh Sackett.

The importance of the site is renowned from the excavations of the Early Iron Age cemeteries which are located some 500 m from the settlement on Xeropolis. Among them is the rich in burial offerings Toumba cemetery closely linked with the outstanding tenth century BC Toumba funeral building. The building at Toumba is remarkable for its size and sophistication. Indeed, at over 50 m long, it is longer than any of the early Greek temples at Eretria or Samos dated 250 years later. Its wooden peristyle provides the earliest evidence for the use of monumental embellishments which play such an important role in the decoration of later temples and monumental buildings from antiquity to the present. In addition, the two human burials and the four horses discovered in the middle of the building are reminiscent of Homeric funerary rituals.

In 2003 Irene S. Lemos resumed excavations on Xeropolis, the settlement of the site. One of the aims was to compare the funerary evidence from the Early Iron Age cemeteries at Lefkandi with domestic data from the settlement. Another important reason to go back to Xeropolis was to imply a systematic employment of interdisciplinary methods which were lacking from the earlier excavations. Equally important was the decision to direct a large scale excavation with the participation of many students. This is an important aspect of the recent excavations and study seasons during which a large number of students have been trained, mostly from Oxford but also from others universities.

The recent excavations have added important information for the history of the site from the end of the palatial era to its abandonment - from 1200 to 700 BC. Among them is the discovery in the middle of the ancient tell of a city-wall and a ritual area located nearby. Continuity from the Late Bronze to the Early Iron Age has been also observed in the eastern part of Xeropolis where a large building was discovered. This has been called Megaron to emphasize its prominence during its long period of use.