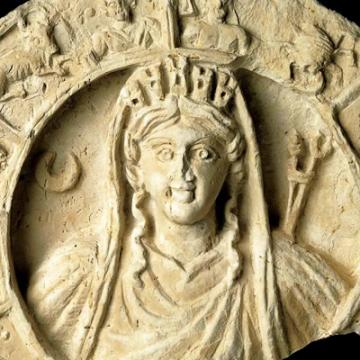 Khirbet et-Tannur is a hilltop sanctuary on the King’s Highway, near Khirbet edh-Dharih which was the third caravan stop 70 km north of the Nabataean capital Petra. In use from the 2nd century B.C. to the 4/6th century A.D., this temple complex is exceptional because of the information it provides about religious practice due to the astonishing preservation of carbonized cult offerings and vessels. Specialist examination of these revealed continuity of Iron Age religious customs after the Roman conquest of Arabia (in A.D. 106) in a sanctuary of local design, but with architectural decoration and gods in classical form in a fascinating iconographic programme.

These results come from the previously unstudied archaeological remains and records of the 1937 excavations by Nelson Glueck (for the American School of Oriental Research in Jerusalem and the Department of Antiquities of Transjordan), which are preserved in the ASOR Nelson Glueck Archive at the Semitic Museum, Harvard University. Although he was ahead of his time in the types of archaeological samples he collected, this evidence had remained unstudied. Despite the lack of modern stratigraphic methods, these finds provide meaningful results because of the site’s single (religious) function, and its lack of contamination from nearby structures or re-occupation. Such information has not survived in other Nabataean temples in Jordan and southern Syria, largely due to later re-use.

Over ten years were spent by an international multidisciplinary team, directed by Judith McKenzie, analysing the finds and records from Glueck’s 1937 excavation and preparing them for publication in two extensively illustrated volumes, which appeared in 2013 (see publications below). The exceptional preservation of the evidence and its significance as a pilgrimage sanctuary make Khirbet et-Tannur of interest to those studying the deities, religious practice, architecture, sculpture, and iconography of the Hellenistic and Roman East.

The focus of the project has now moved to the presentation of the site in educational materials, and the online archiving McKenzie’s drawings and photographs. Marlena Whiting (now at the University of Amsterdam) was awarded a Knowledge Exchange Fellowship (by TORCH, The Oxford Research Centre in the Humanities), held at Manar al-Athar in the Faculty of Classics, October 2014 – April 2015, followed by a CBRL (the Council for British Research in the Levant) Visiting Fellowship. She liaised with the UNESCO office in Amman, the French project at Khirbet edh-Dharih, and the Semitic Museum at Harvard University over plans for tourist development of the site in an attempt to ensure that its presentation and preservation have an academically-informed basis. Whiting has prepared the first version of a video for use in the museums with material from the site. She and Hannah Wellman (University of Oregon) worked on a 48 page booklet presenting the site and its finds to the general public and students, assisted by Andres Reyes (Groton School, MA, and Wolfson College, Oxford), and Judith McKenzie. It was type-set by Groton student Hanna Kim and translated into Arabic by a former Groton student, originally from Aleppo, Diana Sayegh (University of Massachusetts Lowell). The booklet (‘A Gem of a Small Nabataean Temple’: Excavations at Khirbet et-Tannur) provides an accessible summary of the results published in more detail in J. S. McKenzie et al., The Nabataean Temple at Khirbet et-Tannur, Vol. 1 Architecture and Religion; Vol. 2 Cultic Offerings, Vessels, and Other Specialist Reports (2013). The English language version of the booklet was published in 2016 and the Arabic version in 2018. Besides print copies, pdfs of both versions are available online (see below). The results are also being used to inform the preparation of the new displays of the sculptures from the site in the Cincinnati Art Museum. A reconstruction of the altar platform is being included in the “The World between Empires: Art and Identity in the Ancient Middle East” exhibition at the Metropolitan Museum of Art, New York, 11 March to 23 June 2019.

The project has been funded by the Oxford University Press John Fell Research Fund, the Palestine Exploration Fund, the Seven Pillars of Wisdom Trust, the British Academy, the Wainwright Fund, and the Craven Committee of Oxford University. Support was also provided by the Semitic Museum of Harvard University and the Faculty of Classics, University of Oxford. A. T. Reyes’ work was funded by the Dillon Fund of Groton School. Funding for M. Whiting’s TORCH Knowledge Exchange Fellowship at the University of Oxford came from the Higher Education Innovation Fund. Her subsequent work in Jordan was funded by the British Institute in Amman of the Council for British Research in the Levant (CBRL). Printing costs for the booklet were covered by support from a Public Engagement with Research Grant from Oxford’s TORCH, the Dillon Fund of Groton School, and the Semitic Museum, Harvard University. In Jordan, the project was facilitated by the Department of Antiquities of the Hashemite Kingdom of Jordan and the CBRL, and in the US by the staff of the Semitic Museum and the Cincinnati Art Museum.

The Oxford Research Centre in the Humanities