Food for the Gods: Perceptions of a Greek Cultural Paradox 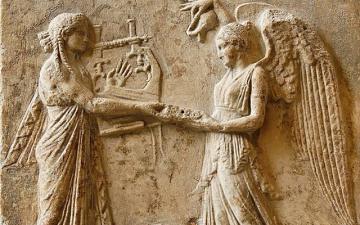 Why do gods eat, and why do people worship them with offerings of food? This project will explore the role of paradox and doubt as essential aspects of religious belief and the transmission of religious narratives and rituals. In many ancient cultures, the production and distribution of food is linked to divine higher powers as the creators and enablers of natural life. Dining is the principal expression of social harmony, and also the central act in Greek religion through the concurrent food offerings to gods, either animal sacrifice, libations or whole foods set aside on tables at which the gods are thought to dine.

These gifts of food would seem to be in keeping with the extreme anthropomorphic conception of Greek divinities, who resemble humans in form, speak Greek and even copulate with humans. But, in fact, for Greeks, contrary to perceptions of divine food in other ancient cultures, divine diet presented a paradox. In Homer, regarded by Greeks as the canonical representation of their gods, the Olympian gods never attend sacrifices or receive food offerings from mortals, and the need to consume food is consistently described as a defining feature of mortal frailty. Yet, Homeric gods frequently promote animal sacrifice as their essential gift offering, a sentiment echoed throughout extant sources. Writers and artists are unanimous in the depiction of sacrificial offerings as the central action in Greek worship, the favorable divine reception of which was thought to determine the safety and prosperity of the community; inscriptions displayed throughout the Greek world regulate even the smallest details of sacrificial practice while the material remains in sanctuaries attest to frequent sacrifices of large quantities of animals. Why the gods wanted these food offerings is not only never made clear, but is often contradicted in Greek mythology, one of the most sophisticated and culturally pervasive corpus of stories about gods ever produced.