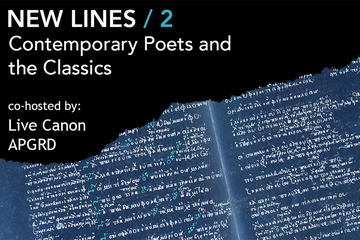 An APGRD event in collaboration with Live Canon, the second in our series of readings by contemporary poets engaging with the classics. Poets include Kym Deyn, Matt Bryden, Mehmet Izbudak and Vasiliki Albedo.

Vasiliki Albedo grew up in Athens, Greece, and lived in the UK, the US and Switzerland working for NGOs that promote the use of renewable energy technologies. In 2017 she won second prize in the Oxford Brookes Poetry Centre international competition (ESL), and joint third prize in the Brian Dempsey Memorial Prize. In 2018 she was commended in the National Poetry competition. Her poems have appeared in anthologies, newspapers and magazines including Aesthetica, Ambit, Lighthouse, Magma, Mslexia, New Boots and Pantisocraties, Tears in the Fence, The Interpreter’s House, The Morning Star, The Rialto, The Telegraph and Under the Radar. Her debut pamphlet, ‘Fire in the Oubliette’ is published by Live Canon.

Matt Bryden is a poet and teacher living in Somerset, where he runs the Somerset Young Poets competition. His pamphlet Night Porter won the 2010 Templar prize while his first collection Boxing the Compass was nominated for the Crashaw prize 2013. More recently, he won the Charroux Memoir prize in 2019 and the William Soutar Prize in 2019. His project Lost and Found, which views the Lost Property Office at Bristol Temple Meads as an entrance to the Greek Underworld, won a 2018 Literature Matters award from the Royal Society of Literature. He has published widely in journals including Poetry Ireland, Stand and Modern Poetry in Translation as and has read as far afield as the Latitude Festival, the Dylan Thomas Centre and the John Hewitt festival in Armagh. In 2018, he created a free interactive online Poetry Map, featuring over sixty of his own poems, to prepare students for the Unseen Poem question at GCSE. He has an MA in Creative and Life Writing from Goldsmiths.

Kym Deyn is an award-winning poet, playwright and fortune teller. Their work is widely published in a range of anthologies and magazines including The Valley Press Anthology of Prose Poetry, Ink Sweat and Tears, and Neon. They have been shortlisted for awards including the West Yorkshire Playhouse “Airplays” Competition and the Wicked Young Writer’s Awards. They are one of the winners of the 2020 Outspoken Prize for poetry. They are a recent graduate of Durham University, where they studied Classical Civilisations, and they are now working towards their Creative Writing MA at Newcastle, where they’re currently based. They produce and write audio drama through Crow and Kettle Presents.

Mehmet Izbudak is a playwright and poet, whose daytime jobs have included being an Academic Teaching Developer at SOAS and a sessional lecturer at Birkbeck College, University of London. He became part of Malika’s Poetry Kitchen in 2014. He is also a member of the South Bank based poetry collective, Tideway Poets. Mehmet is presently working on a translation of Polish poet, Halina Poświatowska’s works.