The Hidden Gospels of Abba Garima, Treasures of the Ethiopian Highlands 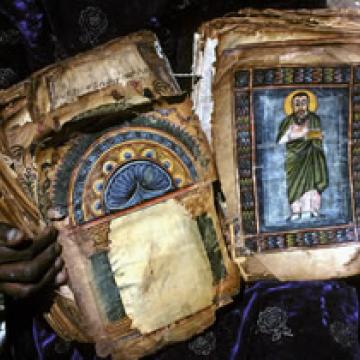 Come and see the Gospels of Abba Garima which have remained hidden for centuries in the Ethiopian highlands in the Abba Garima Monastery – which no woman may enter. According to tradition, God miraculously stopped the sun in the sky to allow Saint Abba Garima to complete them in a single day. Translated from Greek into Ethiopic, their production has remained an enigma. They are the earliest testament of the lost art of the Christian Aksumite kingdom of Ethiopia, which flourished around AD 350–650. Their vivid, finely painted illuminations are at once familiar but also entirely exotic, combining Ethiopian features with those seen elsewhere in Christendom. For the first time, this photo-exhibition presents to the public all of the illuminated pages of these remarkable books, which are amongst the earliest and most important of the rare illustrated gospels books to have survived from Antiquity.

The three Garima Gospels, as the earliest surviving Ethiopian gospel books, are the earliest record of the translations of the Greek text of the four gospels into Ge‘ez, the language of the Ethiopian Church. They include the oldest extant set of portraits of the evangelists as frontispieces to their respective gospels, which became the norm in later illuminated gospel books. Like most gospel manuscripts, the Garima Gospels have ornately decorated “canon tables” which function as concordances of the different versions of the same material in the gospels. They also contain a unique image of the Jerusalem Temple, while an Alexandrian circular pavilion provides a missing link between pagan Hellenistic and Roman versions of the motif and later Christian ones. The Garima Gospels provide glimpses of lost late antique luxury gospel books and art in Ethiopia, as well as in the Christian East. Their artwork is closely related to Syriac, Armenian, Greek, and Georgian gospel books and to the art of late antique (“Coptic”) Egypt, Nubia, and Himyar (Yemen). The Garima texts and decoration demonstrate how a distinctive Christian culture developed in Aksumite Ethiopia, while also belonging to the mainstream late antique Mediterranean world.

The exhibition accompanies the publication of The Garima Gospels: Early Illuminated Gospel Books from Ethiopia, by Judith McKenzie, Francis Watson, Michael Gervers, et al., which places the Garima Gospels firmly within the historical and artistic contexts of the late antique Mediterranean world.

Sponsored by the Classics Faculty, the Oxford Centre for Byzantine Research, and the ERC Advanced Project, Monumental Art of the Christian and Early Islamic East, directed by Judith McKenzie.