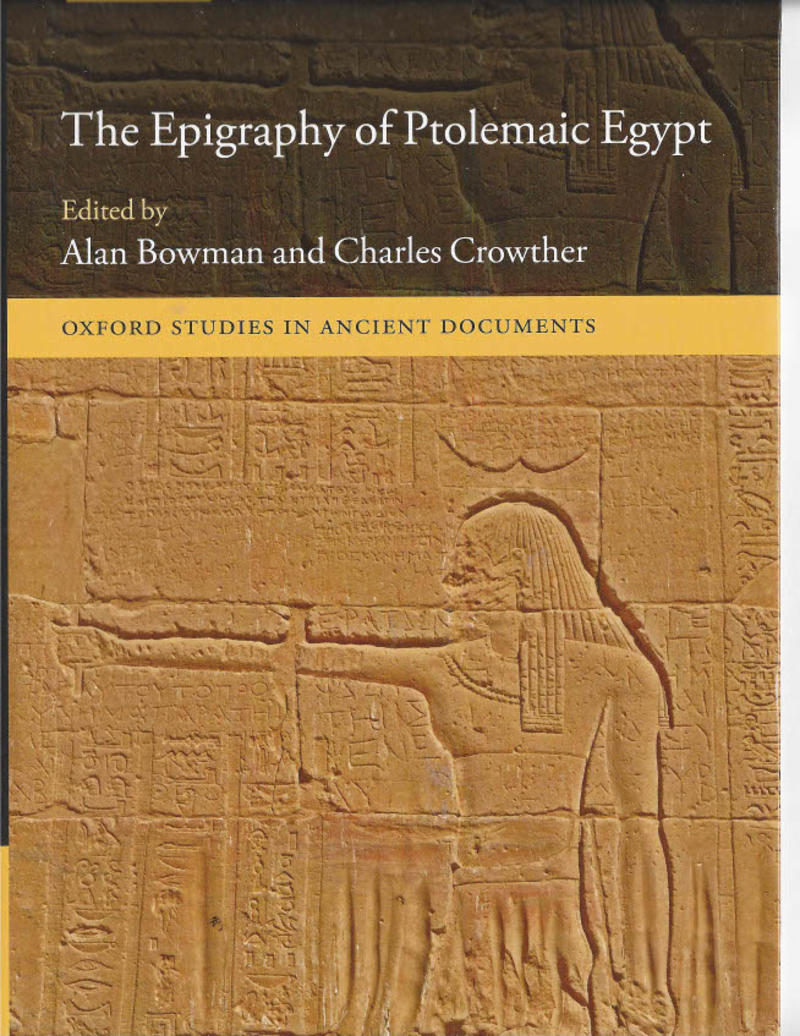 The Epigraphy of Ptolemaic Egypt  has been published by Oxford University Press in the CSAD series, Oxford Studies in Ancient Documents.

It covers a wide range of topics including the history, recording, decipherment and reception of the Greek and bilingual inscriptions of Hellenistic Egypt, as well as the different physical characteristics of the Greek and Egyptian stelai on which texts were inscribed.

The specificity of the Greek epigraphic tradition in the cities of Naukratis, Alexandria, and Ptolemais, where the institutions of Greek civic government and society—assemblies, councils, magistrates, and privileged citizen bodies and gymnasial culture—are found and commemorated in public and private inscriptions comparable in language and context to those of other Hellenistic cities. The literary criteria underpinning the Greek metrical compositions (whether composed individually or ‘made-to-order’ for specific deceased persons, seventeen of whom are women) can be judged against the wider canvas of Hellenistic epigram and the poems have much to tell us both about the ethnicity and literary and cultural preferences of the Greeks, Egyptians and Jews who set them up.

The membership of military communities—exemplified most clearly at Memphis and in the garrisons at Hermopolis in the late second and the first century illustrates both their communal profiles and the desire of individual soldiers or kleruchs (allotment-holders) to commemorate themselves as individuals, a phenomenon not found in anything like this form before the Ptolemaic period.

Religious themes are discussed in relation to dedications by individuals, expressed in Greek through the formula ὑπέρ (‘in favour of ’) the monarch(s), which show consciousness of a personal relationship more direct than anything found in pharaonic epigraphy. The dedicatory plaques found in foundation deposits of temples raise questions of identity and cultural change, in which the phenomenon of bilingualism and multilingualism in the epigraphy is central. Likewise, cases in which the same individuals, or people from the same backgrounds, describe or display themselves in different languages and different terminology in the same inscriptions or set of inscriptions show how much there is to be learned from a juxtaposition of the epigraphic and the papyrological evidence.

The volume concludes with a detailed analysis of the palaeography of the Greek texts, building on Peter Fraser’s unpublished manuscript discussion of the palaeography and chronology of Hellenistic inscriptions among which documents from Egypt are well represented. For Fraser palaeography was above all a key to dating, but it was also a visual and visible projection of identity, assimilation, power and a form of artistic expression. The richness and variety of this collection of studies, for which there is no precedent in recent scholarship, highlights the importance of this unique body of documentary material from the Ptolemaic kingdom.