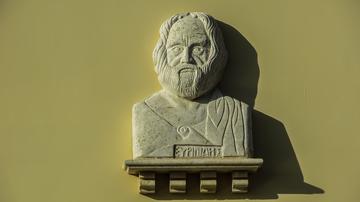 The Faculty of Classics is proud to support a third UNIQ Summer School for 15 young people – this week the students are studying Classics: Ancient Greece.

UNIQ is Oxford’s series of free 5-day courses for state school students in Year 12.  Corona virus halted plans for a residential stay this year, but our tutors, staff and student ambassadors have worked hard to move the course online.

In addition to a series of challenging academic activities, participants can make new friends, question current students and learn the best way to make a compelling application to Oxford.

UNIQ Classics: Ancient Greece, directed by Dr Marchella Ward, is themed around 'Identities Ancient and Modern', and the students will be focusing on the various aspects of identity in Ancient Greece as well as on some of the ways that Classics plays a key role in the construction of certain kinds of identities in the modern world.

The students will be exploring the construction of Greek identity, particularly in tragedy where a separation between 'Greek' and 'non-Greek' is often constructed and maintained by the plot and characters of the plays. They will also be looking at Herodotus and interactions between the Greeks and the Persians - two groups often positioned (for political reasons - ancient and modern!) as opposites that in fact interact and are co-constituted in interesting ways.

The students will also encounter issues of translation, considering how modern identities are often written into and out of ancient texts, and will reflect on the long history of classical literature in the construction of various kinds of identity around the world. Throughout the week, there will be a focus on Euripides' play Medea and on the way the ancient idea of a 'foreign' woman has been appropriated and re-appropriated by different groups at various points in history, both to protest against oppression and to oppress others. The virtual nature of this course provides us with a welcome opportunity to engage with some of the APGRD's fantastic free resources on this play.

As well as this literary, historical, and cultural study, the participants on the UNIQ summer school will also be delving into some of the other important skills that make up a degree as varied as Classics. They will have some taster sessions in Ancient Greek, and go on a virtual visit to the Ashmolean Museum to look at some objects from the point of view of an archaeologist.

We are very much looking forward to welcoming these Year 12s to the faculty virtually, and encourage any Year 11s who are studying at state schools to consider applying for UNIQ next year. Future applicants will be able to apply between December and January for the 2021 course.