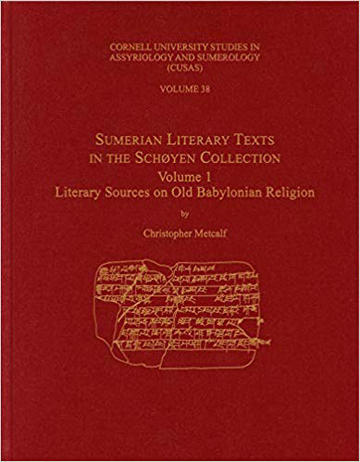 The first in a series of volumes publishing the Sumerian literary texts in the Schøyen Collection, this book makes available, for the first time, editions of seventeen cuneiform tablets, dating to ca. 2000 BCE and containing works of Sumerian religious poetry. They shed light on the interaction between cult, scholarship, and scribal culture in Mesopotamia in the early second millennium BCE.

This volume contains fourteen songs composed in praise of the various gods of the Mesopotamian pantheon; it is believed that these songs were typically performed in temple cults. Among them are a song in praise of Sud, goddess of the ancient Mesopotamian city Shuruppak; a song describing the statue of the protective goddess Lamma-saga in the “Sacred City” temple complex at Girsu; and a previously unknown hymn dedicated to the creator god Enki. Each text is provided in transliteration and translation and is accompanied by hand-copies and images of the tablets themselves.

Expertly contextualizing each song in Babylonian religious and literary history, this thoroughly competent editio princeps will prove a valuable tool for scholars interested in the literary and religious traditions of ancient Mesopotamia.