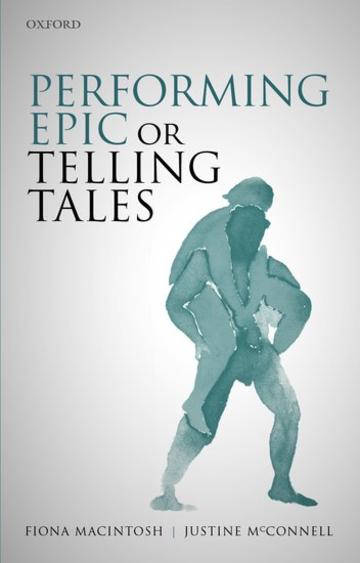 By Fiona Macintosh and Justine McConnell

Performing Epic or Telling Tales takes the new millennium as a starting point for an exploration of the turn to narrative in twenty-first-century theatre, which is often also a turn to Graeco-Roman epic. However, the dominant focus of the volume is less on 'what' the recent epic turn in the theatre consists of than 'why' it seems to be so prevalent: this turn is explained with reference not only to the translation and scholarly histories of the epics, but also to earlier performance traditions and, notably, to recent theoretical debates relating to text-based 'drama' and performance based 'theatre'.

What is perhaps most remarkable about this epic turn is not simply the sheer number of outstanding performances that it has produced; it is also that recent practice appears to have outstripped much theoretical discussion about theatre. In chapters ranging from spoken word performances to ballet, from the use of machines and technology to performances that make space for voices occluded by the ancient epics, Performing Epic or Telling Tales seeks to contextualize and explain the 'narrative'/storytelling (re-)turn in recent live performances - a turn that regularly entails engagement with ancient Graeco-Roman epics, which have long provided poets, playwrights, artists, and theatre makers with a storehouse of rich, often perceived as 'raw', material. Refigured and refracted for the modern era, the epics of ancient Greece and Rome are found to be particularly revealing, and particularly 'telling' of the contemporary wider cultural sphere.