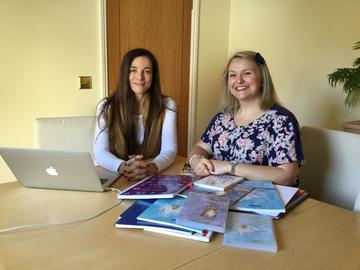 Dr Holmes-Henderson and Dr Masters in the UK

Dr Arlene Holmes-Henderson (Oxford) and Dr Samantha Masters (Stellenbosch) have begun a research collaboration which seeks to explore opportunities to extend the learning and teaching of Classics in South African schools. Since 2014 Dr Arlene Holmes-Henderson has led the Classics in Communities project at Oxford which supports teachers in primary schools to teach Latin and Greek as part of the languages curriculum for children aged 6-11 in all four home nations of the U.K. Research is ongoing into the impact that learning Latin/Greek has on children's cognitive development, but initial analysis implies that Latin facilitates significant improvement (for most children) in literacy skills.

There are significant barriers to literacy development for children in South African schools. Concerned by this, Dr Holmes-Henderson and Dr Masters are working together to investigate whether Latin could help bridge the literacy attainment gap. With a travel grant from the Africa-Oxford fund, Dr Masters visited the UK in March 2018 and Dr Holmes-Henderson made a reciprocal visit to the Western Cape in April 2018. Many fruitful relationships have been made (including with the Classical Association of South Africa and the University of Cape Town) and follow-up plans include an application for funding to run a pilot programme of Latin for Literacy in the Western Cape, together with Latin-specific pedagogical training for teachers in elementary schools (following the Classics in Communities model which has been so successful in the UK).