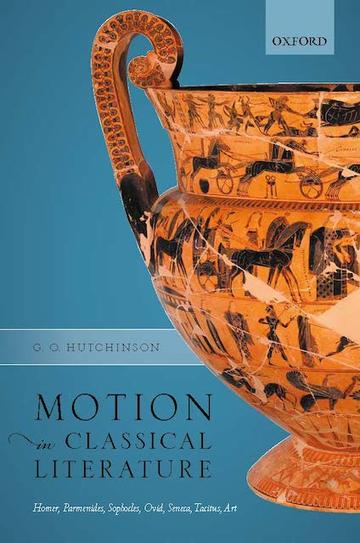 Classical literature is full of humans, gods, and animals in impressive motion. The specific features of this motion are expressive; it is closely intertwined with decisions, emotions, and character. However, although the importance of space has recently been realized with the ‘spatial turn’ in the humanities, motion has yet to receive such attention, for all its prominence in literature and its interest to ancient philosophy.

This volume begins with an exploration of motion in particular works of visual art, and continues by examining the characteristics of literary depiction. Seven works are then used as examples: Homer’s Iliad, Ovid’s Metamorphoses, Tacitus’ Annals, Sophocles’ Philoctetes and Oedipus at Colonus, Parmenides’ On Nature, and Seneca’s Natural Questions. The two narrative poems diverge rewardingly, as do the philosophical poetry and prose. Important in the philosophical poem and the prose history are metaphorical motion and the absence of motion; the dramas scrutinize motion verbally and visually.

Each chapter first pursues the general roles of motion in the particular work and provides detail on its language of motion. It then engages in close analysis of particular passages, to show how much emerges when motion is scrutinized. Among the aspects which emerge as important are speed, scale, and shape of movement; motion and fixity; the movement of one person and a group; motion willed and imposed; motion in images and in unrealized possibilities. The conclusion looks at these aspects across the works, and at differences of genre and period. This new and stimulating approach opens up extensive areas for interpretation; it can also be productively applied to the literature of successive eras.