Lucretius and the Language of Nature (OUP 2020) 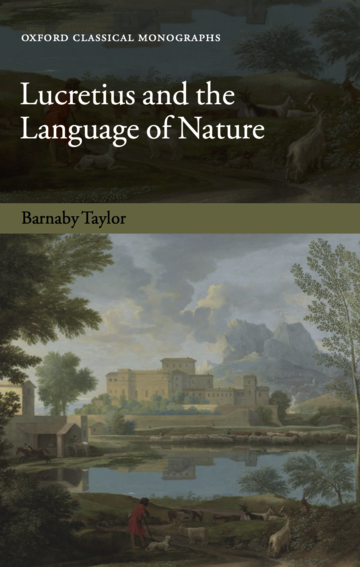 Lucretius' Epicurean poem De Rerum Natura ('On the Nature of Things'), written in the middle of the first century BC, made a fundamental and lasting contribution to the language of Latin philosophy. The style of De Rerum Natura is like nothing else in extant Latin: at once archaic and modern, Romanizing and Hellenizing, intimate and sublime, it draws on multiple literary genres and linguistic registers. This book offers a study of Lucretius' linguistic innovation and creativity.

Lucretius is depicted as a linguistic trailblazer, extending and augmenting the technical language of Latin in order to describe the Epicurean universe of atoms and void in all its complexity and sublimity. A detailed understanding of the Epicurean linguistic theory brings with it a greater appreciation of Lucretius' own language. Accordingly, this book features an in-depth reconstruction of certain core features of Epicurean linguistic theory. Elements of Lucretius' style discussed include his attitudes to, and use of, figurative language (especially metaphor); his explorations, both explicit and implicit, of Latin etymology; his uses of Greek; and his creative deployment of compounds and prefixed words. His practice is related throughout not only to the underlying Epicurean theory but also to contemporary Roman attitudes to style and language. The result is a new reading of one of the greatest and most difficult works to survive from the Roman world.