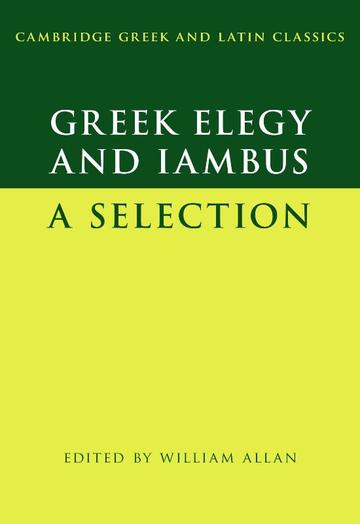 Elegy and iambus are major forms of Greek literature which are crucial to understanding the Archaic and early Classical periods in particular. This edition gathers work by ten poets: two iambic (Semonides and Hipponax), six elegiac (Callinus, Tyrtaeus, Mimnermus, Theognis, Xenophanes, Simonides), and two writing in both forms (Archilochus and Solon). It explores a representative sample of each poet's surviving work, while also highlighting their variety, and provides an up-to-date commentary on major pieces, including recent discoveries such as Simonides' Plataea elegy and Archilochus' Telephus elegy. The wide-ranging Introduction discusses such issues as poet and persona, contexts of performance, and various cultural themes (expansion and contact with foreign cultures, social and political revolution, sexuality and gender, rationalism) as well as language, style, metre, and textual transmission. The volume will be of interest to upper-level undergraduate and graduate students, as well as to scholars of early Greek literature and cultural history.