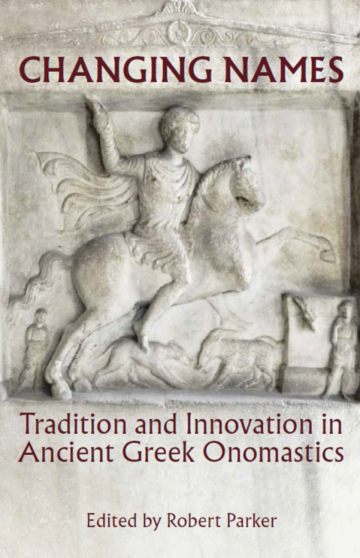 Changing Names: Tradition and Innovation in Greek Onomastics investigates, in relation to the ancient Greek world, the ways in which preferences in personal name-giving change: through shifts in population, cultural contact and imperialism, the popularity of new gods, celebrity status of individuals, increased openness to external influence, and shifts in local fashion.

Several major kinds of change due to cultural contact occurred: Greek names spread in regions outside Greece that were subject to Greek cultural influence (and later conquest), while conversely the Roman conquest of the Greek world led to various degrees of adoption of the Roman naming system; late in antiquity, Christianisation led to a profound but rather gradual transformation of the name stock. Individuals in culturally mixed societies sometimes bore two names, one for public or official use, one more domestic; but women of non-Greek origin were more likely to stick with indigenous names. 'Structural' changes (such as the emergence of the English surname) did not occur, though in late antiquity an indication of profession tended to replace the father's name as a secondary identifier; in some regions 'second' names became popular, perhaps in imitation of the longer Roman naming formulae. The volume is arranged partly thematically, partly through regional case studies (from within and beyond old Greece). Individuals who change their names (typically slaves after manumission) are also considered, as is the possibility that a name might change its 'meaning'.