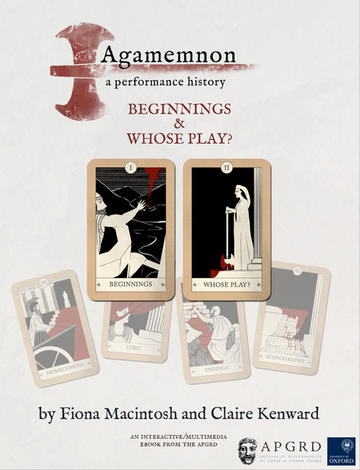 Agamemnon, a performance history is an interactive/multimedia ebook on the production history of Aeschylus’ ancient tragedy, Agamemnon. Created by the University of Oxford’s Archive of Performances of Greek and Roman Drama (the APGRD), the ebook draws on a unique collection of archive material and research at the APGRD and beyond; it uses images, film, bespoke interviews with creative practitioners and academics, and digital objects to tell the story of a play that has inspired countless interpretations onstage and onscreen, in dance, drama, and opera, across the globe from antiquity to the present day.

This first instalment comprises of two related chapters, Beginnings & Whose Play? Focussing on the opening scene of the tragedy, the first chapter, Beginnings, explores how the play has been linked to ‘origins’ and ‘beginnings’. Aeschylus is seen as the ‘father of tragedy’ and Agamemnon is the first play in a trilogy that has often been staged at the founding of dramatic festivals and institutions round the world. Whose Play? asks who is the main character in Aeschylus’ tragedy and shows how Agamemnon himself has rarely been the dominant focus of his name-play. Instead, it is his wife, Clytemnestra, who controls events and who has fascinated playwrights and audiences across millennia.

The first instalment – Beginnings & Whose Play? - is free to download now as an iBook from Apple Books.