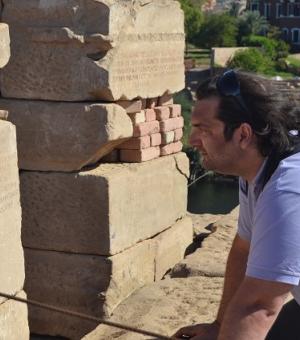 My first degree was in history and archaeology, at the Aristotle University of Thessaloniki. I followed this with a Masters in Egyptian Archaeology, at University College London and a PhD in Archaeology at Leiden University, the Netherlands. My PhD thesis, Alexandrea in Aegypto, deals with the role of the Egyptian tradition in Alexandria during the Hellenistic and Roman periods.

Since 2013 I have been the Research Associate on the Corpus of Ptolemaic Inscriptions from Egypt (CPI), a project based in the Centre for the Study of Ancient Documents. My responsibilities include: the transcribing Peter’s Fraser’s manuscripts; editing the corpus of epigraphic monuments; contributing to the publication of previously unpublished or rediscovered epigraphic evidence; a survey in Egypt, from Alexandria to Aswan, for the creation of an updated photographic archive of epigraphic evidence in archaeological sites, followed by an exhibition in Ioannou Centre in 2016.  Also since 2016, I have given tutorials on Greek Sculpture (600-300BC) to undergraduate students at Queen’s College, Oxford.

I am currently preparing of the second stage of the Corpus of Ptolemaic Inscriptions project. An initial investigation of the epigraphic evidence from Ptolemaic Cyprus is under way,  which includes a series of visits and surveys of museums and sites on the Island. I am collaborating/ [I will shortly begin collaborating] with Dr. Sofoklis Hadjisavvas, emeritus director of the Department of Antiquities in Cyprus to research the Tombs of the Kings in Paphos – a monumental tomb complex, once occupied by Ptolemaic officials.