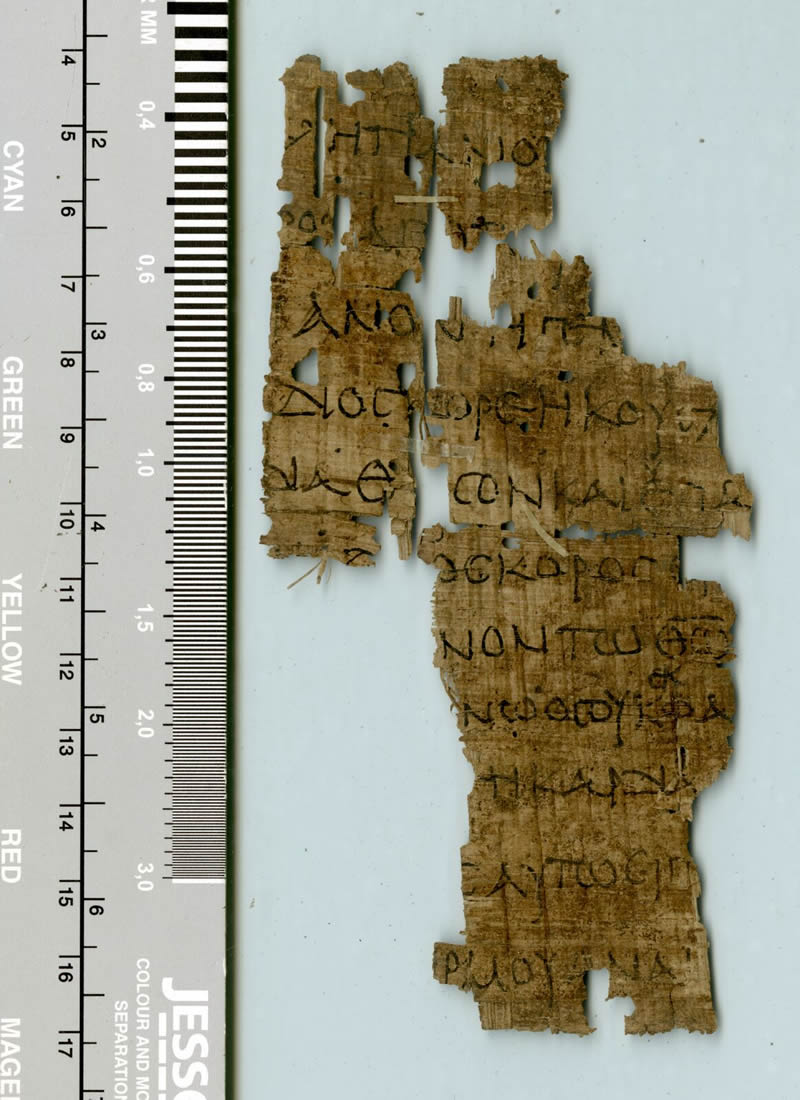 The problem: the script looks early (1st century AD), but the content (Martyrdom of St Dioscorus) proves that the text was copied under Diocletian or later. Archaism or simple incompetence? (P.Oxy.3529; ©Egypt Exploration Society)

The project began in 1999 under the director of P J Parsons, Regius Professor of Greek (Christ Church).

Medieval scribes sometimes date their manuscripts; the scribes of Greek Egypt, to whom we owe the book-fragments on papyrus or parchment recovered by excavators at Oxyrhynchus and elsewhere, never do. Yet it may be important to date a literary papyrus, at least approximately. Those who study the statistics of book-circulation need dates; these dates show for example how popular was Menander, and how unpopular Aristophanes, throughout the Roman period, until in the 4th century AD Old Comedy experienced a revival and New Comedy a decline, with the consequence that Aristophanes survived the Middle Ages (in part) whereas Menander vanished. Even more with particular authors: thus the papyri, if they can be dated, provide our best evidence for the date of composition and circulation of the Gospels and of the Greek Novels.

For the most part, papyrologists 'assign' date by a comparative process. They have recognised certain 'styles' of script; within each they try to find examples which are objectively datable; and then, using these as signposts, to map out a diachronic path of development within each graphic area. Each new papyrus can be matched with this schema, and a date assigned accordingly. Allowance must be made for archaism and incompetence; and for the influence of Latin script.

The objective of the project, which was originally funded by the Arts and Humanities Research Board for three years, is to bring more substance to this process, by a focused and systematic search for objectively dated material relevant to defining styles and analysing their development. This material includes writing exercises; literary texts on the front or back of dated documents or with datable documentary annotation; dated documents in literary or sub-literary hands.

The first stage of the Project was a systematic reading of the corpus of published papyri - about 300 volumes in all. This was largely completed by 2001/2. After an interval, the Project has acquired additional resources as a collaboration between the Oxford Centre for the Study of Ancient Document, whose servers will house an updated version of the Database, and the Laboratorio di ricerche storiche e archeologiche dell’antichità-University of Cassino, which is organising the formatting of the Database for Web consultation. What remains to be done is to arrange the query system and then to check the data and add to it material from recent publications. Byproducts should be a paper on the analysis of style in the light of the writing exercises, and a paper on the use of literary hands for the copying of documents.